Home > Launch a Restaurant > Networking to Publicise your Restaurant

Networking to Publicise your Restaurant 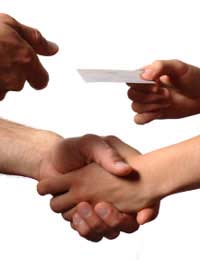 Networking is either a wonderful way to boost your business, or a cheesy yuppie invention, depending on your point of view. Or some might say depending on how good you are at it.

Whatever you think of networking, the truth is, done well, networking can be a great way to increase the profile and profitability of your restaurant, so why not learn how to network in a way that you feel comfortable with?

A common misconception about networking is that it is somehow like dodgy pyramid selling, trying to take money of your best friends in exchange for some old tat they don’t want. This may be true in some circles, but you don’t need to perpetuate it!

Actually, when you are passionate about your business and believe that your restaurant offers good value for money and a great dining experience, then it can actually be hard not to shout about it. In its truest sense, networking is just telling people about your business. It is only when people start being hired to network and corporate entertainment takes over all the decent seats at concerts and football matches that we have come too far from the true meaning of networking.

So, when it is your own restaurant and you know that you offer a great product, what is wrong with shouting about it from the rooftops?

There will probably be at least one networking group in your local area. There are some national and international groups, such as BNI, where you join a ‘chapter’ or local group and then attend a morning meeting once a week.

Some people find these groups terribly helpful for their business – these people tend to be the ones offering a service that is useful to a cross section of people – such as stationery suppliers and lawyers. A restaurant will fit into this category, as most people go out for dinner at least a few times a year. Be careful not to offer too many freebies, or be expected to give fellow members free food or drinks when they visit – are they going to give you stationery for free?

Running your own restaurant means that you will be thinking about it pretty much all the time. It can be hard to talk about anything else. Why not use this passion and commitment to your restaurant to your advantage? Of course, you need to be careful not to become a dreadful bore and only talk about yourself all the time – especially to friends and family – but its fine when you talk to strangers! They’ll only talk about themselves anyway, so why not give a shout out to your restaurant?

Face to face networking is often very effective as your enthusiasm for your business is contagious.

Your Restaurant as a Networking Venue

It is worth thinking about allowing your restaurant to be used as a networking venue. Even if you do not participate, you will have the income from the networking organisation (usually a cost per head, with breakfast included) and will be getting your restaurant introduced to a new potential business customer base. This is great marketing for your restaurant.
Next Page